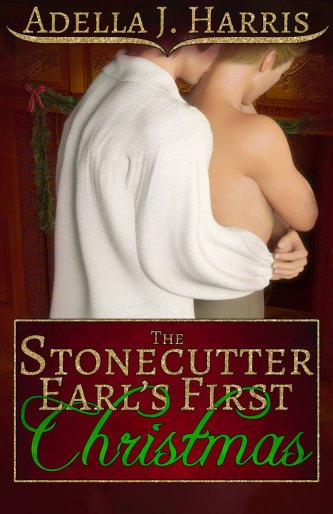 Nathan Fitzroy hates the holidays. Estranged from his family for refusing to marry, he’s still expected to keep up appearances, which means attending their holiday celebrations. And that means that, from the beginning of December until the middle of January, he needs to find work that will let him take off almost as many days as he works there. For him, that means working at a molly house called the Goat’s Horn.

Owen Landon was quite content to be a stone cutter. It was what he’d trained for, and it earned him enough money to pay his brother’s school fees and still live comfortably enough in a cottage in their village. He’d always been told his father was distantly related to nobility, but he’d never thought much of it, until a solicitor came to tell him he was the new Earl of Morebrook, a position he has no idea how to fill.

One night in December, when Owen can’t stand his new role another moment, he sneaks away to the seediest molly house he can find, the Goat’s Horn, for a distraction. And find one he does, a beautiful fellow with just the accent and bearing he’s supposed to be learning. When he sees the man again away from the molly house, he comes up with a plan to both spend more time with him and learn to be an earl. Owen offers him a position tutoring him before the start of the Christmas parties he’s supposed to attend.

Nathan’s worst nightmare comes true when one of the clients of the Goat’s Horn recognizes him outside of the molly house. But the man offers him a position that will allow him to earn money away from the Goat’s Horn until Christmas. If only he can remember he’s supposed to be tutoring the fellow, not bedding him, and certainly not falling in love with him.